Continued from 24hrs in Barbados- PT. 1

OUT OF THE AIRPORT, FINALLY!

After waiting for about 20 minutes, the supervisor showed up with a petite lady. She explained that the airline was able to book a hotel room for me at Rostevor hotel so I could stay a night in Barbados with hopes that the initial airline would call off their strike the next day. The officer then casually throws in that the young lady next to her was to follow me around as my guard. When she saw the look of confusion on my face, she quickly added that it was for my protection. So off we went through security and finally out of the airport into a minibus that took me to my home for the next few hours.

We arrived at the Rostevor Hotel and I just thought ‘wow’ (in a bad way). It was a budget hotel but it was definitely better than staying at the airport overnight. We checked into the hotel and I noticed the room had two single beds. I started thinking about pushing the beds together to make a bigger one for myself when the guard mentioned to me that her sister will be here in a minute to stay with me overnight and she, the guard, will return and switch places with her sister in the morning. I was surprised as it didn’t occur to me that the guard was actually to stay with me.

Her sister arrived and suggested we go out to get some food. I was definitely up for this as all I had eaten that day was airport food back in Toronto. The hotel was located on St. Lawrence Gap which is a popular street near the beach with quite the vibrant nightlife. We took a walk down the street and stopped by a roadside barbecue. This was the highlight of this dreadful day. I ordered jerk chicken (of course) and a side of mac pie. We headed back to the hotel to eat; the food was absolutely delicious. I was a bit hesitant to go to sleep being that I was in a distant land with a stranger in my room. I watched a few shows on my iPad and updated friends and family on my current situation. I finally allowed myself catch some shut-eye once I noticed the guard’s sister had fallen asleep.

WAKING UP IN PARADISE

The next morning, I woke up to the most beautiful view I’ve ever seen. This hotel wasn’t so bad after all. It was so dark the night before that I hadn’t noticed I got the beach front room! It was the bluest, clearest waters I had ever seen. Honestly, I could not stop staring out the balcony. 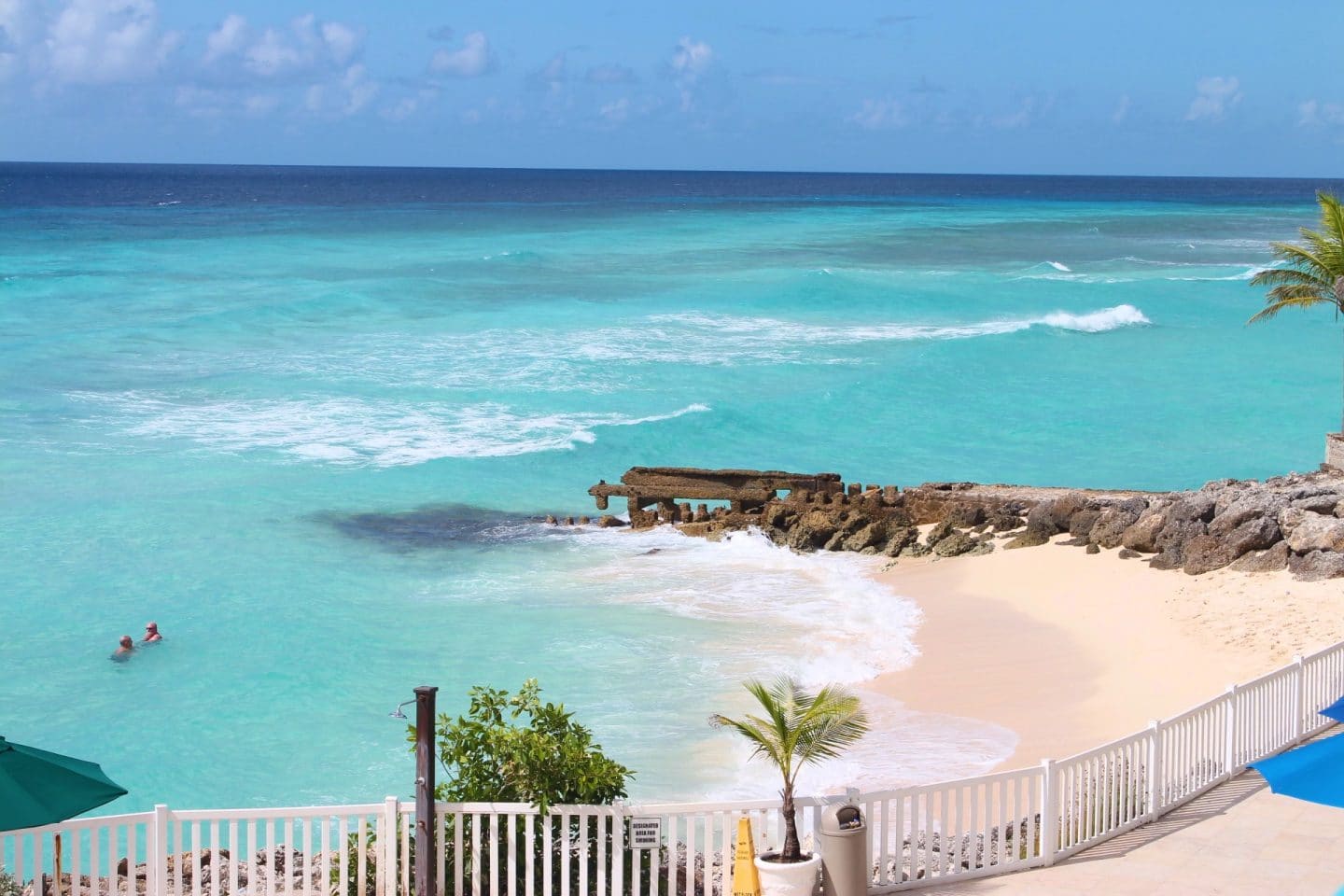 The guard returned and traded places with her sister. We later contacted the airport and got confirmation that the airline to Grenada had called off their strike so I was good to go. I had no interest in going to Grenada anymore because even if I arrived there in the afternoon, I wouldn’t have enough time to tour the island and campus as I had to be back in Canada the following day. The travel agent was so gracious in booking a 5 pm flight for me to head back to Toronto instead. So I had a day to spend in Barbados! We headed downstairs to have breakfast by the beach. I had scrambled eggs, sausages and toast. It was very lackluster but the view and fresh pineapple juice made up for it. I convinced the guard to allow me take a walk and explore the city a bit with the few hours I had left in Barbados. We took a walk down St. Lawrence Gap and on to the beach. 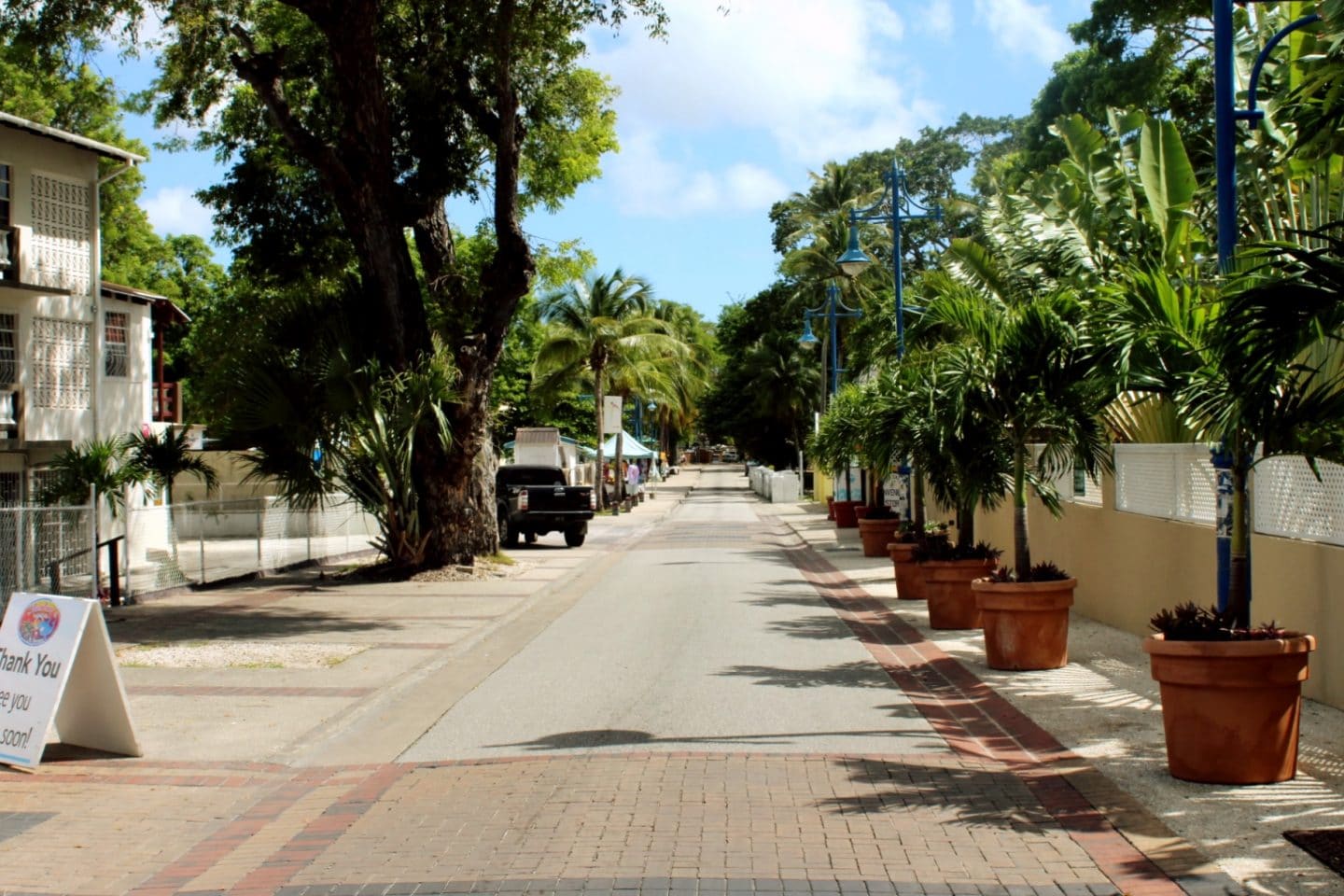 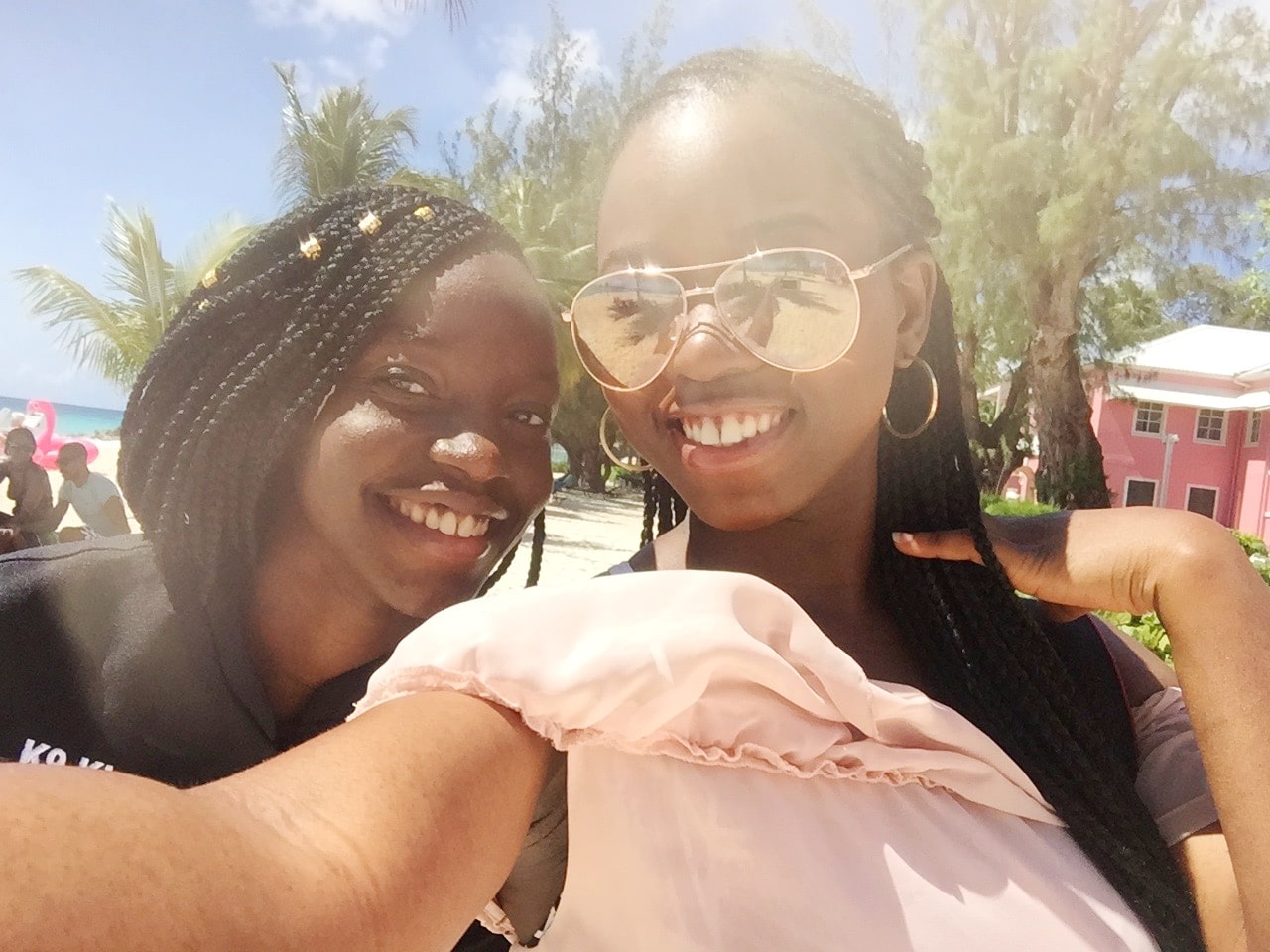 The guard and I 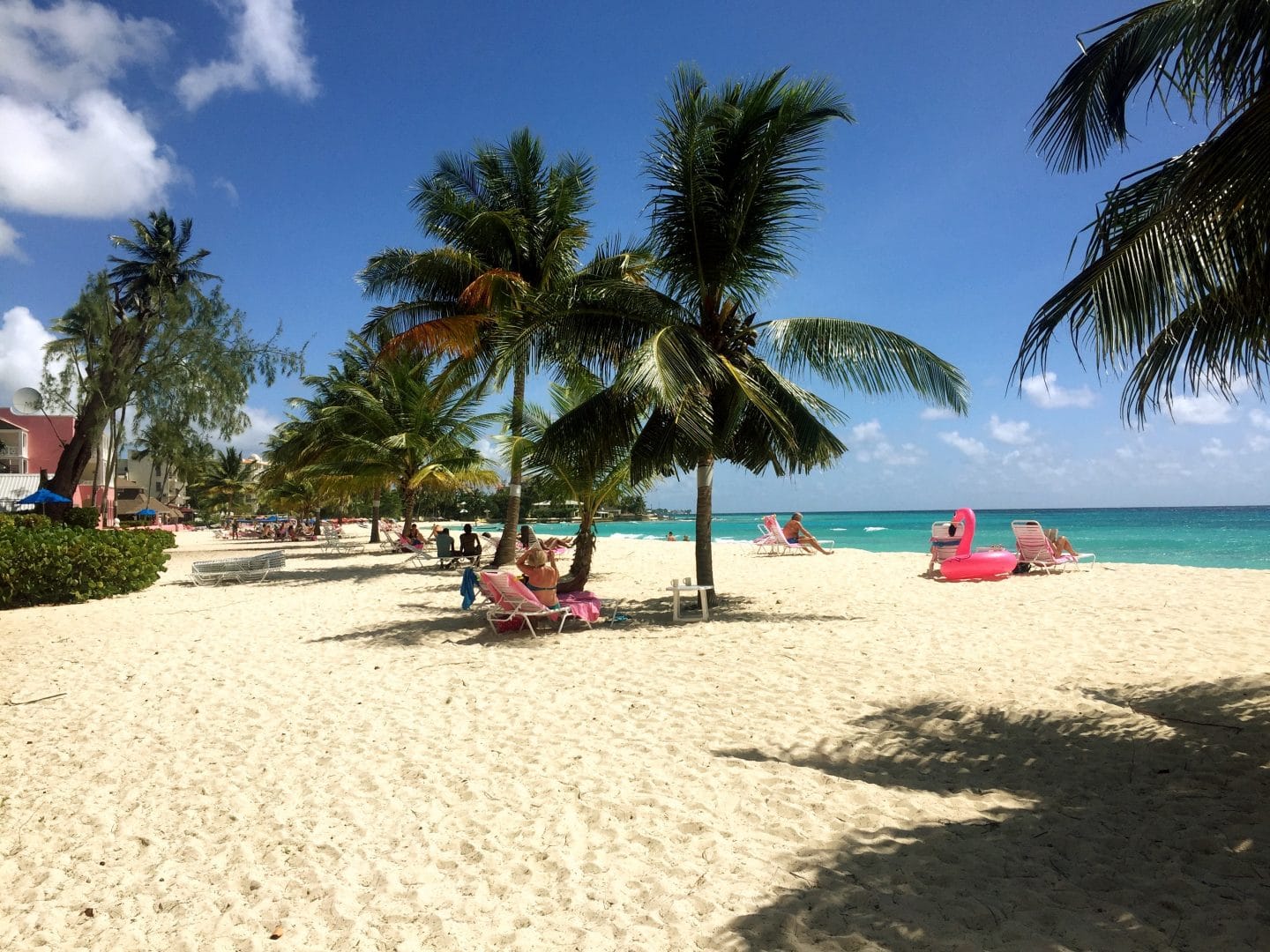 IMPROMPTU JET SKI-ING WITH A LOCAL

As we walked along the beach, a local called out and tried to convince us to jet ski with him and go swimming with the turtles. These were both things I had never done before so I didn’t really take him seriously. To my surprise, the guard made a convincing argument that it would be a great way for me to have a little fun before we had to head back to the airport in a few hours. I was sold and excited even. The local then disclosed his name, Josh, and that it’ll cost $70USD. The Nigerian in me did not believe this and I quickly told him all I had was $50USD. He accepted my offer so quickly that I wished I had negotiated better and offered a lower amount. Excited, we hurried back to the hotel so I could change into my bathing suit. Soon we were back on the beach and I was off on a jet ski with Josh!

This was the most fun thing I have ever done. I felt so free and alive. Jetting down the Atlantic Ocean with the wind in my hair (braids lol), salt water splashing on my face and the most beautiful waters surrounding me. The further we went away from the beach, I started thinking that if this guy decided to kidnap me, he very well could. All I knew about him was his first name. I decided to put my worries aside (God’s got me anyway) and just enjoy the moment. We kept going further and further away from the beach and finally stopped at another beach on the other side of town.

We walked into a fish market to get scraps to feed the turtles. It was a bit weird as I was in nothing but my bathing suit and a life jacket in the middle of a fish market. It was very quick though, we soon walked back to the ocean where he gave me a snorkel mask and showed clueless me how to use it. We walked down a narrow bridge where he threw some scraps into the ocean and voila, I could see the turtles! We jumped into the ocean and chased the turtles. This was seriously a lot of fun. The turtles did scare me a bit but watching them in their natural habitat was absolutely breathtaking. After doing this for a while, we went back to the beach and this time he allowed me to operate the jet ski. It was a very bumpy ride, to say the least but still a lot of fun! 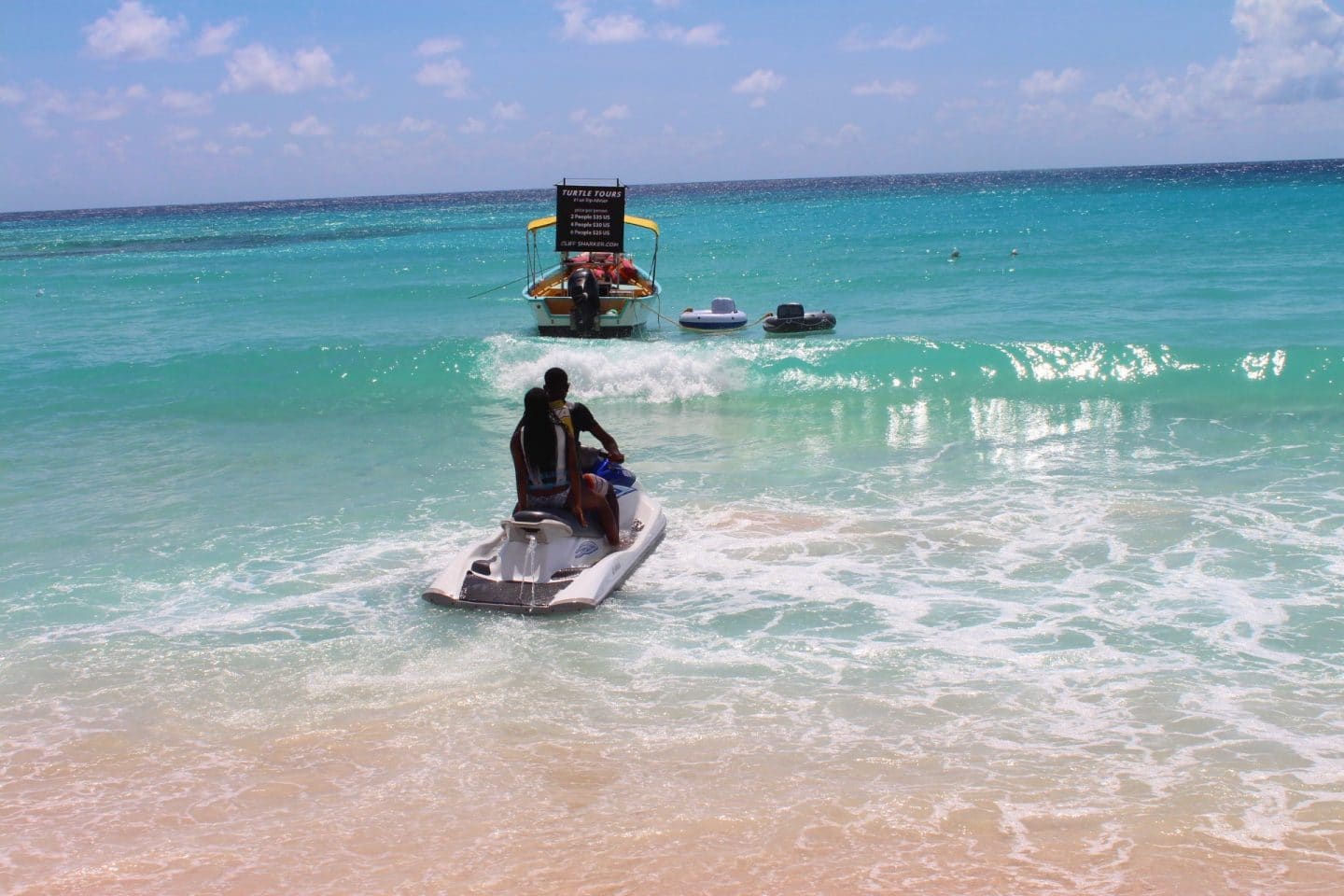 TROUBLE WITH IMMIGRATION, YET AGAIN

When we arrived at the beach I noticed the guard was very anxious. She said we needed to head back to the airport right away because she was in trouble. Apparently, we were supposed to be at the airport by noon even though my flight didn’t leave till 5 pm. It was now almost 2 pm and the immigration officers had contacted the head of security who was her dad. Her dad then called her very upset and yelling that I was never supposed to leave the hotel in the first place. The guard started motioning that we run back to the hotel but I still wanted some pictures of the wonderful moments I just had, so I pleaded for her to take some photos of me on the beach. She took some very horrible photos, but that’s another story. Anyway, we ran back to the hotel and to our dismay, her dad was already there waiting with the cab that would take me back to the airport.

After a quick rebellious shower, we got into the cab and were soon on our way to the airport. When we arrived at the airport, I was summoned to the immigration supervisor’s office for questioning. I explained what we had been up to and apologized as I was not aware it was mandatory to be at the airport at noon. The guard waited with me, checked into my flight for me, and even went with me to the gate to board the flight. It was not until I boarded the flight that my passport was finally handed back to me (phew!).

It had been a very interesting weekend, to say the least, but jet skiing and swimming with turtles in the Atlantic Ocean, definitely made it all worthwhile.

PS: On the final flight from Toronto back to my home city, I was told that the flight had been overbooked and that I did not have a seat on the plane so I’d have to wait to take the next flight which was the following day. Fortunately for me, someone missed the overbooked flight so I got to take their seat and arrived home as planned. Sigh, what a trip!

INSPO OF THE DAY: “In everything give thanks; for this is the will of God in Christ Jesus for you.” (1 Thessalonians 5:18)